22. Success story: A rubber mat toilet for the Shih Tzu?

"Your newspapers recommendation as a toilet area were ineffective," the big shouldered man of around 1.6 metres tall told me. "My Shih Tzu simply shreds them."

"Is she toilet-trained?" I asked as I discharged her to go home, after removal of her cherry eye. A big red gland of around 0.8 cm x 0.4 cm had bulged from her left eye, at the medial side. 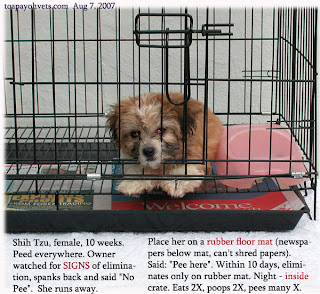 "Cherry eye" in the left eye of the Shih Tzu


"I bought a rubber mat from the hardware shop," the owner said. "In 10 days, she was toilet-trained on the mat put on the kitchen floor. She used to pee and poop everywhere and liked my carpet."

"Did you spray the puppy's urine or other liquid onto the mat?" I was surprised that a rubber mat could attract this high-energy Shih Tzu to eliminate upon.

Is it that simple? Just buy a rubber floor mat. The type with suckers below and put it on the floor. The puppy just go there to eliminate when all the time she has been doing it in the living room and the bedrooms? This puppy was not crated as she whined a lot. So, she had free roaming of the whole HDB apartment.

I would not believe that the rubber mat was so effective.

Here are the secrets for success.

1. Watch for signs of elimination. Mainly "sniffing" in this case.

2. In this case, the owner spanked the puppy lightly on the backside when she eliminates on unapproved areas and said: "No pee" firmly. Then he brought her to the rubber mat and said: "Pee here."

"She would run away after spanking," the owner explained. "But she learnt fast."

"Is the puppy free to roam when unsupervised?" I asked.

"No, she is kept inside the crate at night. She tried not to get in but we just put her in and locked the door.

"Feeding is two times per day and she poops after eating. She pees many times, uncountable."

This seems to be a success story. The newspapers are still used inside the pee pan under the crate flooring.

To me, this puppy is toilet trained to pee on the newspapers indirectly. The scent of newspapers, confinement, supervision, watching for signs and in this case, negative reinforcement training (spanking the backside) are critical factors for early success in toilet-training.
Posted by Photography by Sing Kong Yuen at 12:55 AM

Where did you find your rubber mat? What brand and name is it? I can't find one ANYWHERE and have looked at hardware shops...thanks!