"He is not so intelligent as the brother," the young couple said as the they could not understand why the 2nd sibling would not use the grate (pee pan plus wire flooring above). "He usually goes to the floor outside the bathroom to pee and poop or near the grate but not on top of it."

The other brother had no problems just stepping onto the grate and eliminating on it. Both were purchased from a home breeder with several Shih Tzu puppies without experience of using the grate.

"The grate is best as the puppy paws don't get soiled by urine," the couple told me. "Newspapers are messy." 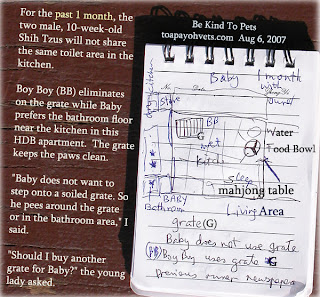 "It is not about high canine intelligence," I explained. "The 2nd sibling just does not want to dirty his paws by using the same toilet area as his brother. So he goes to a new location."

"We use vinegar and water to neutralise the urine smell in that location outside the bathroom but he still goes there," the lady in her late twenties was exasperated. "Do you advise that we buy another grate for the 2nd sibling?"

"I don't know whether it will work," I dared not advise any expenditure which might not be justified. "Most likely he is used to eliminating on the tiled floor when he was with the home breeder."

Two puppies are sometimes harder to toilet-train. But in this case, the owners want the paws to be clean. So another grate may be the answer.

To human beings, it seems that the 2nd sibling is stupid. Some may think he needs privacy in his toilet habits. The most likely explanation for his behaviour is that he wants a clean toilet area to eliminate. That is the inborn instinct of puppies.

"The homebreeder advised 2 teaspoonfuls of dry puppy food 2 times a day. We feed 4 times a day, according to puppy books we read," the owners said. "We notice that the puppies eat less of their stools on giving them more meals. Are they fat?"

I placed my fingers along the spinal area. There was a slight feeling of the spines from the backbone.

"Just trim, not obese," I said. "Puppy book authors written by Caucasians do recommend 4 times feeding for this age but there are a small number that recommend twice a day feeding. If you feed more, the puppy poops more often and this affects the toilet-training success rate. That is why two-times-a-day feeding is recommended by most pet shop puppy sellers in Singapore."

"In this case, feed two times with 4 teaspoonfuls twice per day," I said. "It is a matter of observation rather than teaspooonfuls. Puppies generally stop eating or wolfing down the food when a sufficient amount is given. Observe the spinal area for protruding spines. If there is none, the puppies are well fed."

Coprophagia (eating stools) is a frequent complaint. In this case, it could be insufficient food as the amounts recommended by the homebreeder would need to be increased weekly as the active Shih Tzu puppies grow up.

P.S. Grate training can be successful in many cases because the puppies have had been crated when younger. They pee and poop onto wire flooring. The Singapore-grate with pee pan below set up closely duplicates the wire grating feeling for the puppy. Putting newspaper with urine smell onto the pee pan attracts the puppy to climb up onto the grate to pee and poop.

Obviously, this method cannot be guaranteed unless the owner actively teaches the puppy to use the grate. There are many anecdotes of success from my over 500 cases of case study of toilet training studies in Singapore. This grate is seldom recommended by the pet shop puppy sellers. It has to be used inside a confined area or room.
Posted by Photography by Sing Kong Yuen at 3:02 PM